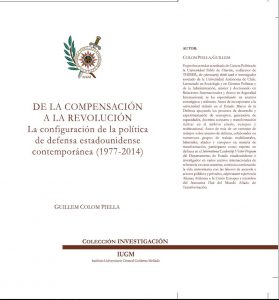 The Role of a Champion in U.S. Defense Transformation: Implications for Spain’s Military Forces

Professor Guillem Colom has written a powerful, insightful book that analyzes the evolution of U.S. defense strategy, policy, guidance, and operations since the “high tide” of the Cold War. He draws lessons-learned and implications for Spain’s military forces in the 21st Century. He has two objectives: First, he seeks to discuss and analyze the evolution of U.S. thinking about a far-reaching revolution in military affairs (RMA) and how that can influence and shape current and future national security debates in Spain. Second, he seeks to provide the first serious discussion of the last 50 years of U.S. defense evolution and transformation from the perspective of Madrid.

He has accomplished these goals in an exemplary manner. His analysis should prove valuable for U.S. and Spanish, among other, readers interested in national security, defense and military affairs.

Important for any understanding of U.S. defense, however, is the recognition of the inherently political process for strategic and programmatic success––who gets what, when, where, why, and how[1]. Indeed, as American political scientist Harvey Sapolsky explained in his book The Polaris System Development, it is the inherently and necessarily political process by which government programs achieve high priorities and guarantee resources for research and development (R&D), programmatic, and operational success.

Any cookies that may not be particularly necessary for the website to function and is used specifically to collect user personal data via analytics, ads, other embedded contents are termed as non-necessary cookies. It is mandatory to procure user consent prior to running these cookies on your website.